WATCH MY MOST RECENT COOKING VIDEO VIEW NOW
As an Amazon Associate I earn from qualifying purchases. Thank you for supporting Farmette Kitchen at no extra cost to you.
3shares

How to make kimchi- a beginner’s guide to making mak kimchi.  Homemade kimchi is easier than you think using this simple recipe with step by step instructions on how to cut, salt, rinse, and season the vegetables. 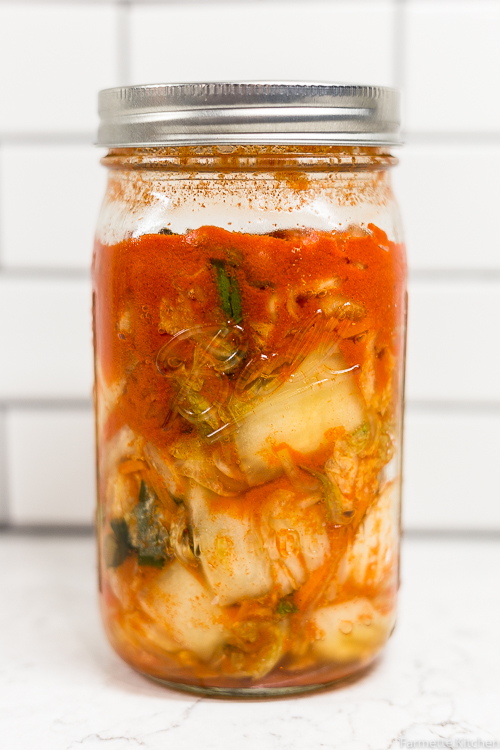 We were first introduced to kimchi during the wait to bring our son home from South Korea.  Learning about his birth country helped me to stay busy that year and was an opportunity to introduce our kids to a new culture.  We started shopping at our “local” (1.5hrs away) Asian market and eating all.the.bulgogi.  My obsession with k-dramas began (why I learned to cook Curry Rice) and I couldn’t wait to get my hands on a hot, fresh hotteok from a street vendor in Seoul.

It was during that time that we attended our first Korean festival in a small K-town community outside of Dallas and finally got the chance to try kimchi!  I don’t love pickled/fermented foods, so kimchi has been more of an acquired taste for me, but it was love at first bite for James.

Kimchi is a Korean side dish made of salted, seasoned, and fermented vegetables served with nearly every meal.  Traditionally, this famous staple is made with napa cabbage and Korean radish that is seasoned with gochugaru (Korean chili powder), green onions, garlic, ginger, and fish sauce.  It’s also super healthy, great for your gut (probiotic), and full of vitamins, minerals, and fiber.

Kimchi is… unlike anything else.  It’s sour, spicy, and savory.  It might be salty or sweet.  The flavor varies widely based on the recipe, amount of seasoning, length of fermentation, and even based on the vegetables used.  Kimchi made with cabbage might be quite strong whereas one made with cucumber will be lighter.

You can expect intense garlic and fishy umami notes.  It will be sour from the fermentation (as the lactic acid produced by bacteria during fermentation creates a tangy, pungent flavor; think sour kraut) and range from mildly spicy to very spicy depending on the amount of red pepper used (which gives kimchi it’s signature red color).

The ingredients in kimchi vary widely, even in Korea, based on the regional flavors.  Some prefer to use shrimp to aid the fermentation, while some sub the fish sauce for a soy sauce mixture to make it vegan.

We purchased all of the ingredients at Hmart (an Asian grocery store) but you can find the vegetables at your local grocer and order the speciality items like the fish sauce, sweet rice flour, and gochugaru on Amazon.  Note that they napa cabbage was much cheaper at the Asian grocery store (about $0.59 a pound) than our regular grocery store.

For this homemade mak kimchi recipe, you will need:

Korean red pepper chili is available in powder and flake, but it is NOT the same thing as crushed red pepper flakes.  My friend told me that pepper flakes are used more often during the summer and that the powder will make the kimchi more red.  It seems that many restaurants opt to use powder to prevent the flakes from getting stuck in their customer’s teeth.  We had powder on hand, so that is what we went with for this recipe. 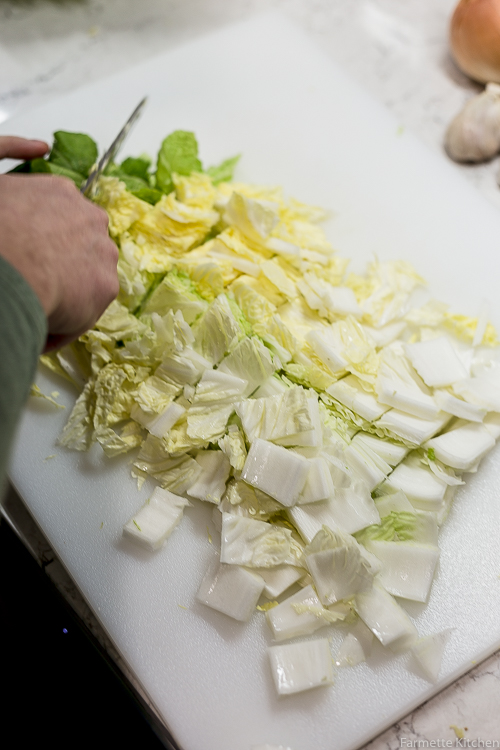 How to Make Mak Kimchi

Mak kimchi differs from traditional kimchi in the method of preparation.  Pogi kimchi is made by quartering napa cabbage, salting for several hours, and carefully stuffing each leaf of the quartered cabbages.  To serve, the cabbage quarter is then cut into bite-sized pieces. 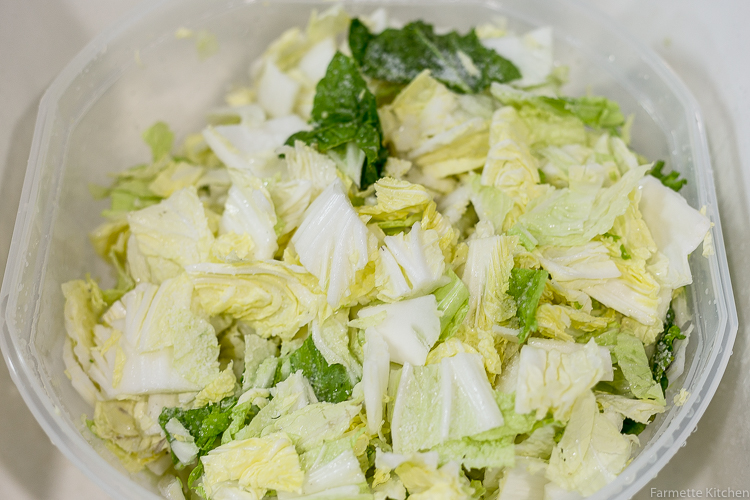 After you chop the cabbage, you will need to draw out the water using salt.  You will want to use a coarse salt without additives (like anti-caking agents).  If you use fine salt, be sure to cut the amount by at least a 1/4.  The salt helps to draw out the liquid but you don’t want to use too much or it can make the end result too salty. 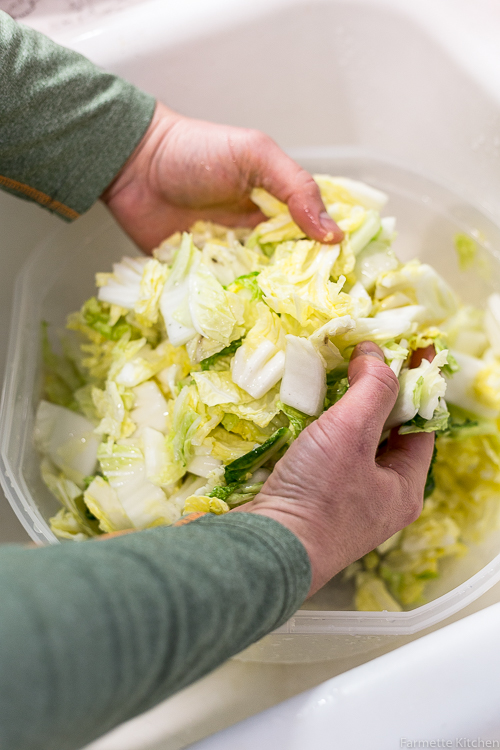 Every 30 minutes, turn the cabbage over to salt evenly but don’t drain anything off at this time (total salting time will be 1.5 hours).  Once this is finished, you will need to rinse the cabbage thoroughly (three times) in cold water before draining and setting aside. 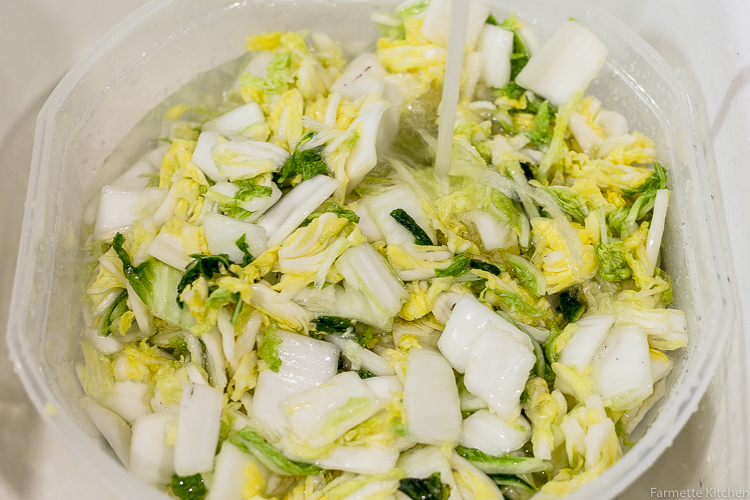 Next, you will need to make a rice flour porridge mixture.  This will need to be fully cooled before adding, so start on this while your cabbage is salting.  The porridge helps aid in fermentation but also helps the red pepper powder stick to the vegetables. 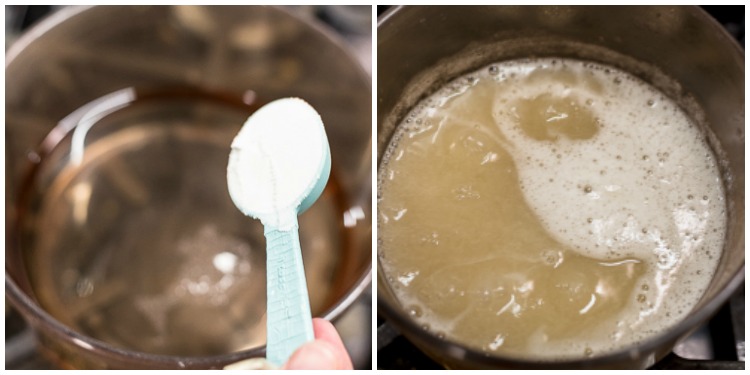 While the porridge is cooling, you will chop the rest of the vegetables.  The carrot and Korean radish needs to be julienned (think matchsticks), while the green onion will be chopped (discarding the bulb at the end).  Toss these in a bowl and set aside.

This is the tool I use to to julienne – makes it SO easy! 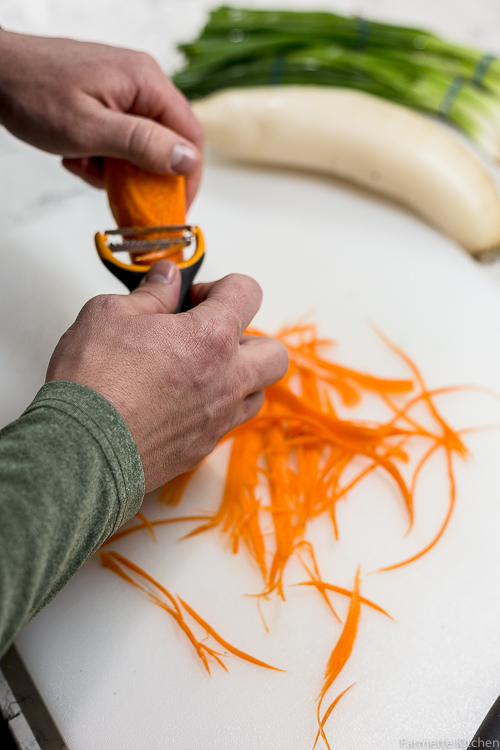 After the vegetables are chopped, start on the fish sauce mixture.  It is best to use a blender or food processor.  Combine the garlic, ginger, onion, and fish sauce and blend into a smooth, thick paste.

How to Make Kimchi

Now that the cabbage has been salted and rinsed, the porridge is cooled, the vegetables are prepared, you are ready to combine.  In a very large bowl, add the porridge and fish sauce mixture.  Stir these two together and then add in the gochugaru.  This will be when you decide how spicy you want your kimchi.

For this homemake kimchi recipe, we used a scant 1 cup of powder and it has a nice approachable heat.  James mentioned he might bump this up to a full cup next time.

Once these ingredients are combined, mix in the chopped vegetables (carrot, radish, and green onion).  Finally, attempt to drain the cabbage one last time before adding it into the bowl.   James used a spatula up until the point of adding the cabbage, where it’s best to switch to using your hands.  Be sure to wear gloves!! 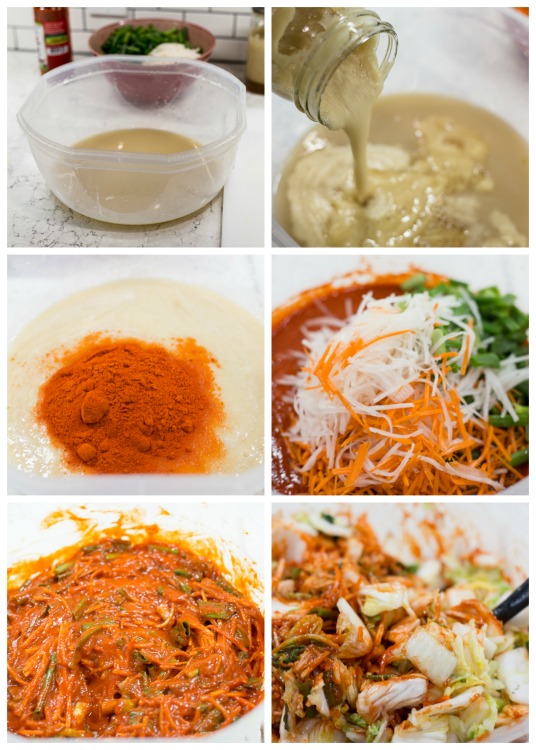 This recipe fits perfectly in five 32oz wide mouth mason jars.  You want to use a container with a good seal to prevent your entire house from smelling like kimchi.  Distribute the kimchi evenly between the jars; use a fork to push the vegetables down in an effort to remove as much air as possible.  Ensure that the vegetables stay well below the liquid while also leaving space at the top for expansion while it ferments.

We let our kimchi sit (sealed) at room temperature for 2 days which resulted in a nice sour flavor (you can leave it out an additional day if you prefer).  After the first 24 hours, you will see air bubbles throughout.  Open the jars and use the back of a fork to push the vegetables down to release the air bubbles.

After another 24 hours, push the vegetables down again before placing the jars in the refrigerator.  Each time that you take kimchi from the jar, you will repeat the process of pushing the vegetables back down below the liquid. 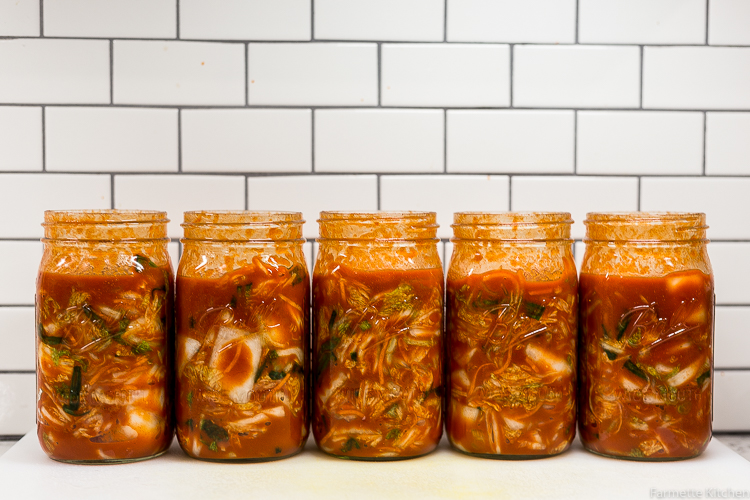 How long does kimchi last?

This mak kimchi does not last as long as traditional pogi kimchi (which lasts … kind of forever ha-ha) because of the shorter fermentation and salting process.  This recipe will last about 2-4 weeks in the refrigerator, but will continue to sour as time passes.

How to eat kimchi?

When ready to serve, pull out the desired amount from the jar and remember to shove the rest back down below the liquid.  James enjoys kimchi as a side dish often, with salad or grilled chicken or whatever else we’re having.  I mainly eat mine with Asian dishes.  We had kimchi dumplings (mandu) in Korea that were delicious.

If your kimchi has turned too sour to eat alone, you can use it to make kimchi jjigae (kimchi stew) – it is a great way to use up aged kimchi!

Each time you remove kimchi from the jar, use a fork to push the vegetables back down below the liquid.

Note: Keep in mind the nutritional facts are only a guesstimate and the sodium level is very misleading as the salt is rinsed off of the cabbage.

As an Amazon Associate and member of other affiliate programs, I earn from qualifying purchases.

I love to share classic recipes you will make again and again to nourish your family. Join me in creating a life made simple where good food doesn’t have to be complicated. Read More

Open
Instant Pot Applesauce - no need to peel the apple

Open
Made with fresh berries and a honey lime dressing

Open
How old were you when you learned about the greatn

Open
This Pressure Cooker Potato Soup is a simple, fami